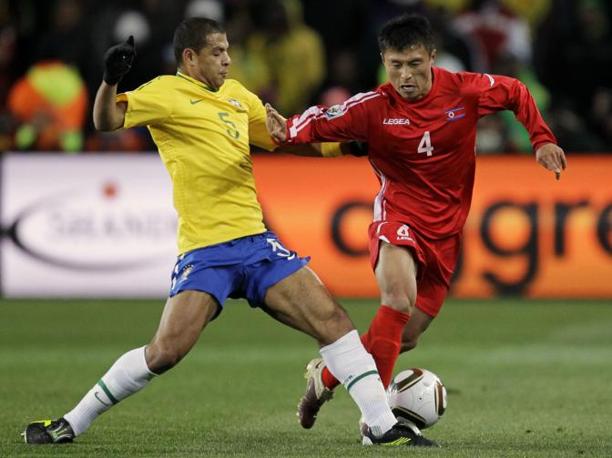 Recent Results:
17/02/2012 v. Kuwait D 1-1
29/02/2012 v. Tajikistan D 1-1
09/03/2012 v. Philippines W 2-0
11/03/2012 v. Tajikistan W 2-0
13/03/2012 v. India W 4-0
Challenge Cup History: Perhaps the biggest question surrounding the 2010 FIFAWorld Cup Finalists is: Why are they participating in a competition meant for emerging associations. There is no easy answer. The precedent for this started when the Asian Football Confederation allowed Bangladesh and India (classified as developing associations) to participate in the inaugural 16-team edition in 2006 due to the withdrawal of Mongolia, Laos, and Timor-Leste.
Since entering the competition in 2008 the Chollima have exerted their dominance over feeble opposition.  Their record in the competition is remarkably similar to that of Palestine. They have only one loss to their name, which came to Central Asian opposition in the shape of a 1-0 semifinal loss to Tajikistan (Palestine’s lone reverse was a 1-0 quarterfinal loss to Kyrgyzstan in 2006). Their defence has only let in three goals over their past three participations while Palestine have only conceded four overall. True to form, both teams will come into Friday’s semifinal on the back of 270 minute shutouts.


Background: DPR Korea are known for their negative play but that might be a slight mischaracterization of their true style. The Chollima are first and foremost, a very organized and disciplined side and its no surprise none of their Group Stage opponents could not penetrate their defence. For the tactical junkies out there they can be an absolute pleasure to watch with their novel 3-3-2-2 formation confounding opponents. Two wingbacks operate only to find an outlet pass and then hurry back to their defensive duties. The man in between them is also charged with primarily shielding the defence, with the responsibility of creating chances falling to the two advanced midfielders. When invited to attack, the midfielders will take up positions on the flanks briefly transforming the formation into an über-attacking 3-3-4. When the Koreans are without the ball look for them to drop eight players back into their own half and harass the opposition into ceding possession.
Challenge Cup Squad: The Koreans are without  The People’s Wayne Rooney- Jong Tae-Se (FC Köln/GER). A host of other foreign-based forwards are missing as well: Choe Kum-Chol (Muangthong/THA), Kim Chuk-Jin (Wil/SWI), and Kim Seong-Yong(Kyoto Sanga/JPN) are not with the team. Surprisingly, Jun Jong-Su has decided not to call upon the experienced Hong Yong-Jo (69 caps/22 goals) instead opting to rely on youth. The Chollima do have the services of their captain- Muangthong United defender Ri Kwang-Chon. Eight of the eighteen players called up are defenders.
Key Player: Pak Nam-Chol (the midfielder) has scored in all three matches while enjoying way too much space to roam and link up with the forwards. Shutting him down will be key to limiting DPR Korea’s goal scoring opportunities.